For the first time in the United Kingdom, Makeover Monday was live in London at the London Tableau User Group.

Andy Kriebel and Eva Murray presented the event to a sold-out audience on Monday 16th April 2018 at Tableau’s UK Headquarters in Southwark, London.

The event was also live-streamed on YouTube for everyone in the world who was not able to attend it in person.

Makeover Monday is a weekly social data project that allows anyone in the data visualisation community to rework an original chart and give it a makeover.

Tableau is one of many tools that the community can use to create their viz although there have been users who have made their visualisations using Flourish, Google Data Studio, Power BI and much more.

On the night, there was plenty of free pizza and drinks on offer for the participants to consume with their fellow community members.

Andy and Eva explained in detail about the project before Jeff Bernson, Senior Director, Results Management, Measurement and Learning at PATH explained the dataset the participants would be visualising for Week 16 in 2018.

As it was about the reported cases of malaria in the Southern Province of Malaria, the dataset was simulated to look at the number of cases reported both in rural and urban settings for Health Facility staff and Community Health Workers. 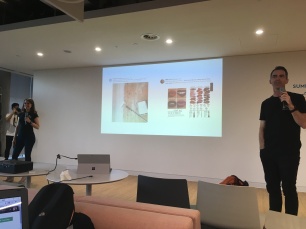 Once the data was live on data.world, participants had to come up with a makeover in an hour and present their work to the audience.

After a one hour makeover, a select number of people volunteered to present their Makeover Monday Week 16 entries.

The next London Tableau User Group event has a panel of UK Tableau Zen Masters on Thursday 31st May 2018 at 18:30pm at Tableau’s UK HQ inside the Blue Fin Building in London.