Although it’s been a quiet couple of weeks on the blogging front, it has definitely given me time to find something to blog about. As it’s the start of the 2018 FIA World Rally Championship season this week, it seemed fitting to do a viz on Rallye Monte Carlo, the season-opener to the premier rally class in motorsport.

I had made it an intention to visualise different motorsport series in 2018 for that reason. Whilst I will be doing some F1 vizzes this year, I decided to pick Rallye Monte Carlo for the fact that it’s been the season-opener to the WRC since it’s first-ever season in 1973.

Wrangling the data into Excel was fairly straightforward until I hit trouble with the timing data. One day I will get the hang of timing data in the viz tools I use (Excel, R and Tableau, I’m ready for you!). It was no big deal as I still have a lot to learn with working with timed data. 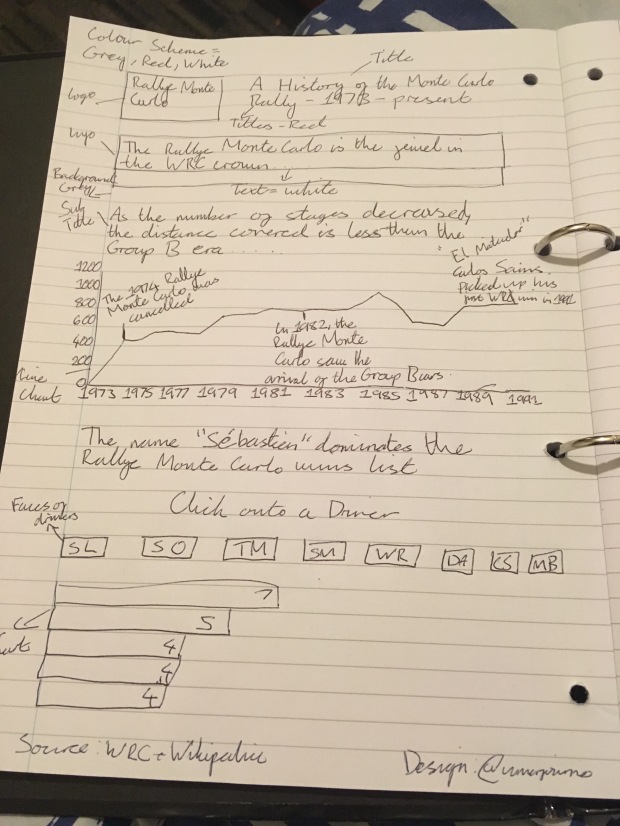 Sketching the viz out on paper, I knew I wanted to go for a long-form visualisation with Rallye Monte Carlo. This was down to the WRC not being as popular as F1 so I had to inform my audience what the rally was about in order to avoid the user from losing interest.

When I managed to build it in Tableau, I knew when I built the first iteration of my viz, I had spotted a problem.

The bar charts for winning manufacturer and multiple winners of Rallye Monte Carlo had no monetary value to the viz. It almost felt as if they were there as an unnecessary distraction, rather than adding context and value to the viz itself. Back to the drawing board I went.

When I sketched the viz again, I saw the line chart I had used to analyse the distance covered for Rallye Monte Carlo would make for an interesting angle to my visualisation. By adding appropriate annotations to my chart, it would help guide the user along to see if the rally distance has increased or decreased over the years.

This is an important lesson I have learned when designing vizzes over the past year, less is more. Never feel as if you need to add another chart or two in your viz as it can be distracting to your user, as well as making sure you focus it around the main topic, which is the rally.

With that said, here is my viz, looking at the fluctuating distance covered for Rallye Monte Carlo since 1973 – present.