Out of all things I had considered to do a data visualisation on, it had never crossed my mind to do a long-form viz on one of the games I used to play as a teenager, Tomb Raider.

Until now. I recently did a Tomb Raider viz on PlayStation sales data using basic bar charts as part of Cole Knaflic’s #SWDchallenge for March 2018, which I wrote about a few weeks’ ago.

Lara Croft has always had a place in my gaming heart since I had played Tomb Raider 2 when I was three-years-old on the original PlayStation console. It seemed a no-brainer as the Tomb Raider film reboot is being released on the 16th March 2018 in the UK with Alicia Vikander playing the British archaeologist and adventurer.

Since I had already wrangled the data I used for the #SWDchallenge, it meant that adding and tweaking my spreadsheet to ensure I had all the information I needed to bring my visualisation to life. This meant I could spend more time drawing and sketching my viz on paper to ensure I had an idea of the design and structure.

Unlike other viz sketches I have done, I took my time with crafting this sketch because I wanted to make sure that what I drew on paper was exactly the same when I create the viz it in Tableau. Once I was happy with my concept viz, I went into Tableau and built the visualisation.

Building the visualisation was fairly straightforward although I spent a lot of time fiddling around with putting the viz together. With my previous long-form vizzes, I would use far too much text instead of letting the charts and visuals speak for themselves which is what happened with my Royal Rumble viz in January 2018.

After spending a lot of time looking at my viz to ensure they were no spelling or grammatical errors, as well as inaccuracies with my charts, I finally published the final visualisation onto Tableau Public. That’s another thing I have ticked off my list of subjects to viz about!

Here is the final visualisation of “A History of Tomb Raider” in which you can view on Tableau Public by clicking on the picture below. 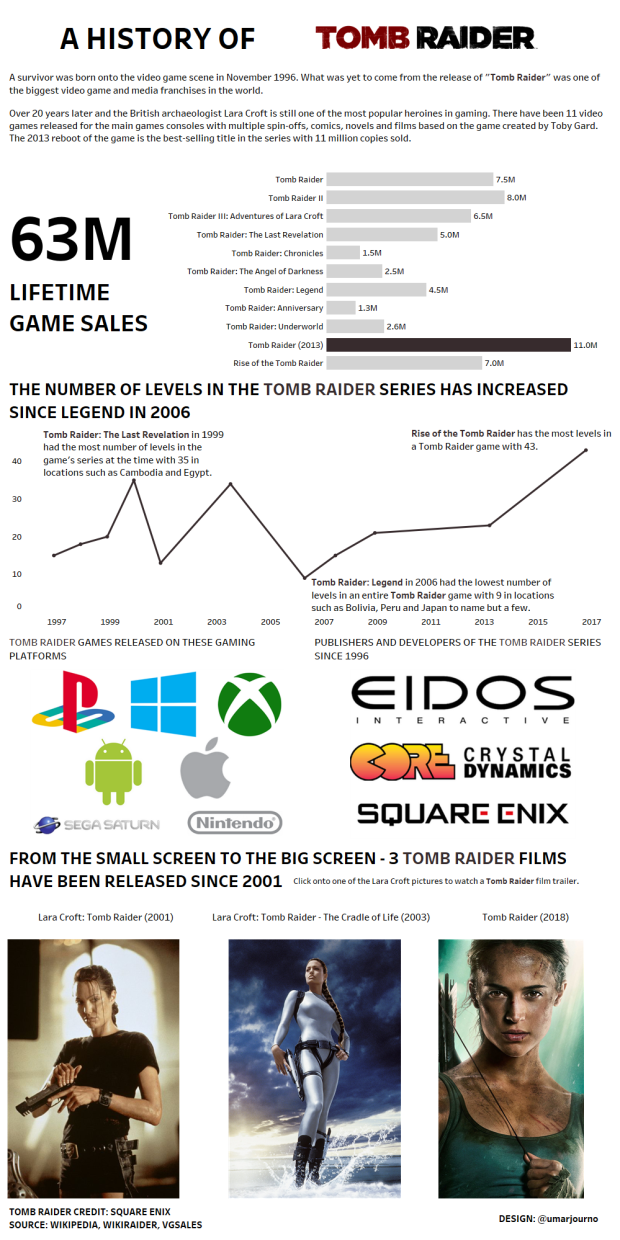