Another day, another Makeover Monday. Eight days into the New Year and we are onto Week 2 in which Eva chose the topic of “Looks v. Personalities” in which it’s based around the dataset from YouGov on the characteristics of the twenty countries that were part of the study.

On a personal front, I really struggled with this dataset to find an interesting story but at the same time I enjoyed it because it pushed me to think outside the box when coming up with a viz.

Here is the original visualisation from YouGov which shows the ranked British relationship characteristics.

What could be improved?

With that said, I really enjoyed this week’s Makeover Monday dataset. I focused on the value of intelligence within Asian and Arabian relationships which was quite an interesting area to look at. 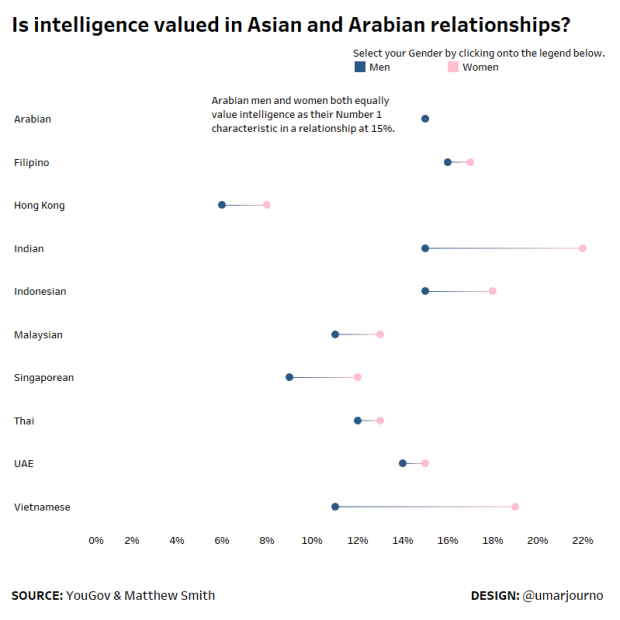 When I did publish the first iteration of my viz, I immediately got some feedback from Charlie Hutcheson on the ways I could possibly improve it for the viewer.

I'm not sure the highlighter brings anything to the table Umar. I'd consider losing it, and just find a way to incorporate the legend in a subtitle to save a bit of space.

Following on from Charlie’s feedback on Twitter, I removed the highlighter from the dashboard. But then I had another problem for viewers interacting with my viz, how would they tell by the colours which is men or women within the barbell chart?

Charlie once again gave me more feedback that proved very valuable towards my dataviz development on Twitter.

Without interactivity, how could viewers determine what the different colours mean? I'd look to find a way to overcome that information gap, and maybe find a non-annotated way to overcome the Arabian equal value issue.

With that said, I looked to highlight the colours in the title of my viz so that the viewer could understand it quickly enough without having to interact with the tooltips in Tableau Public.

Here is the final visualisation which you can view on Tableau Public by clicking on the static image below. Thank you to Charlie for the feedback as I have definitely learned quite a lot about best practice for creating data visualisations either in Tableau or RStudio.